No Vacancy on This Land

“Over the course of his lifetime he went from having everything to having nothing”, Bonnie Devine says of Chief Tecumseh.[1] He was a shooting star dragging history behind him – the legacy of successive betrayals by the Europeans in their thirst for land and their willful delusion that it was virgin and theirs for the taking. In The Tecumseh Papers Bonnie Devine finds an “artist’s way into history” and presents us with openings and resonances. She offers us a richly interwoven history in which the past, present and future fold into and around each other and have implications for our present social situation.

Two years earlier Devine accepted the invitation of Art Gallery of Windsor curator Srimoyee Mitra to respond to the historical record of the War of 1812 and to transform this response into an exhibition on the occasion of the 200th anniversary of Tecumseh’s death at the Battle of the Thames, close by in Chatham, on October 5, 2013. Beginning with two works from the AGW’s collection – terracotta busts of Chief Tecumseh and General Brock by Hamilton MacCarthy, circa 1896 – Devine uncovered “a completely fictional representation” of Tecumseh and consequently a “story that demanded to be told.”

The accounts of the War of 1812, while acknowledging the crucial importance of Chief Tecumseh and the native warriors in battle, none-the-less relegate their role to a secondary one; one that sidelines Tecumseh’s tremendous leadership and vision for a sovereign state for the Native confederacy northwest of the River Ohio. It is generally recognized that the British (Canadians) could not have won against the American forces seeking to control British territory in Canada if it were not for the Native warriors who fought along side of them. What is pushed aside however, is the primary motive that Tecumseh and the Native confederacy had for doing so. They wanted their inherent nationhood in a sovereign homeland to be acknowledged. Brock himself recognized this when he struck an agreement with Tecumseh and the confederacy – one that was implicitly state- to -state. They agreed that the Indians would fight with the British against American forces in exchange for a guarantee that the British government would support the recognition of the sovereign state that Tecumseh’s confederacy demanded. This would have stemmed the tide of American settlers westward onto Indian land and changed the course of history.

But we know what happened to this land instead – in spite of living up to their end of the bargain and thwarting the American drive northward, the sovereign nationhood that should have been made part of the treaty that ended the war was ignored. Brock and Tecumseh died in separate battles and the Treaty of Ghent basically reestablished the pre-war borders between America and the British colony that would become Canada – with no explicit mention of a Native sovereign state. The legal fiction, the doctrine of terra nullius (that no one owned the land prior to European assertion of sovereignty) prevailed, and together with the idea of Manifest Destiny, rationalized an unabated colonization of the American west by European and American settlers. The land was lost and Tecumseh’s confederacy broke apart.

“Land was not just an abstraction for Tecumseh as it was for Brock. It was everything.” His life was contemporaneous with the loss of land as European colonists claimed greater and greater proportions of it. Devine shows this shrinking distribution with three wampum belts that are affixed to the red strips of fabric that trail behind the robe that she made for Tecumseh out of an old Union Jack. The robe is decorated with shells and deer hide fringes with the “mantle of the alliance”, a stretched rawhide painted with glyphs, draped down the back. Beginning from Tecumseh’s right to left hand side, the wampum belts represent three treaties: the Royal Proclamation, 1763; the Treaty of Greenville, 1795; and the Treaty of Ghent, 1814. The brass beads sewn into the belts signify native land and the nickel ones, the land claimed by the settlers. In 1763 half the belt is nickel and half is brass but on the wampum belt for the Treaty of Ghent, negotiated after the War of 1812 (fought by Tecumseh and the native warriors he rallied) not one brass bead is to be found. The entire belt is nickel. I found it impossible not to feel the tragedy and injustice and this itself makes the historical “facts” less an abstraction, more relevant to present circumstances and thus not just an irrevocable issue of the past. As Devine pointed out, this legacy connects directly to the Idle No More movement in its vision to “honour Indigenous sovereignty, and to protect land and water.”[2]

The fluidity between the past, present – and the future – implicated by Devine in her work extends into a triad of concept, story and materials that are interwoven together throughout the installation. Look closely at the red fabric runners flowing from Tecumseh’s robe and you can see that they are stained with dirt. This dirt comes from reeds gathered by the Humber River where Devine intertwined with them with the three strands of red cotton to make a braid, Toronto Braid: for the Mississaugas, an outdoor installation on the grounds of the McMichael Gallery. The braid was a tribute to the Mississaugas, who also fought along side the British in the War of 1812, in this case at the Battle of York in 1813. After the braid was disassembled and the reeds returned to the land, Devine used them in Tecumseh’s robe. She had wanted the cloth to inhabit the space of the AGW, to flow from the robe, down the stairs of gallery towards the Detroit River that Tecumseh was fighting to protect, but because of safety concerns, had to compromise and confine their reach to the upper gallery space.

These interwoven connections between time, place, materials, ideas and history are amply shown in other works in the show as well. In the Dictionary of Names Devine draws and paints on top of old novels that romanticized the history of Tecumseh. She erases and selects certain words, painting into and over a glamourized history, not completely eradicating what was presented in these novels but bringing the world inhabited by Tecumseh to the fore in the pictorial tradition of the Anishinaabek. This method of working is a reference to the Plains Indians’ ledger paintings, done over top of accounting ledger books used by the European settlers in the 1800’s. The most celebrated were done by Indian warriors in the mid-1800’s while held as POW’s in Fort Marion in Florida. The ledger paintings themselves come from pictorial traditions in the Plains whereby winter counts were drawn onto rawhide deerskins during the winter months. Devine works in this manner as well, painting and drawing the stories surrounding Tecumseh onto rawhides and paper, all materials carefully chosen in a way that is integral to the story and conceptual framework of her meeting with Tecumseh.

Devine isn’t just giving a history lesson from a new perspective – valuable as that would be, nor is she romanticizing the past. Instead she is, as she described, finding “an artist’s way into history” – into the dense geographical, political, American, Canadian, First Nations and colonial histories. In her re-telling the past is interwoven into the present and the future and it enfolds into our current social conditions. This enfolding of time and particular approach to history and the past is also part of the process whereby Devine found her artist’s way into this history. She describes how she “inhaled a complicated and conditional place in Tecumseh’s world.”

In The Tecumseh Papers, Bonnie Devine offers us a complex history: of events, of materials and materiality, of politics and spirituality and of relationships – relationships that extend beyond those between Tecumseh and the people who inhabited his world to those between artist and viewer, artist and subject and the artist and her work, and through this between the viewer and this new envisioning of an old story. In this way we are compelled to not only reexamine what we thought we knew about the history of Canada and the First Nations people (including the events of the War of 1812) but to accompany Devine into the space that she inhabited when she entered into Tecumseh’s world, a place that she describes as “complicated and conditional”. This enfolding of time and place, and Devine’s inhabitation of these simultaneous presents makes it clear that the past isn’t far away at all.

In moving towards the future, she said, that is impossible to “unlearn the dominant paradigm from an aboriginal and feminist perspective.” This was the central question posed during a panel discussion at the AGW. Instead, she suggested that the question should be reformulated to ask how to “develop a way to be inside a more complex and multidimensional world” to become “nimble, quick, angry and responsive” in transitioning between different worlds. As viewers of her installation, The Tecumseh Papers, Devine asks us not to be mere spectators, but to pay attention, to live for a moment in the complicated and continent world such as that inhabited by Tecumseh and by doing so to think compassionately about the present circumstances of First Nations’ people and ways to move as allies, together into a uncertain future.

[1] All quotes unless otherwise noted come from an interview that I did with Bonnie Devine at the Art Gallery of Windsor during the installation of her exhibition Sept. 2014. 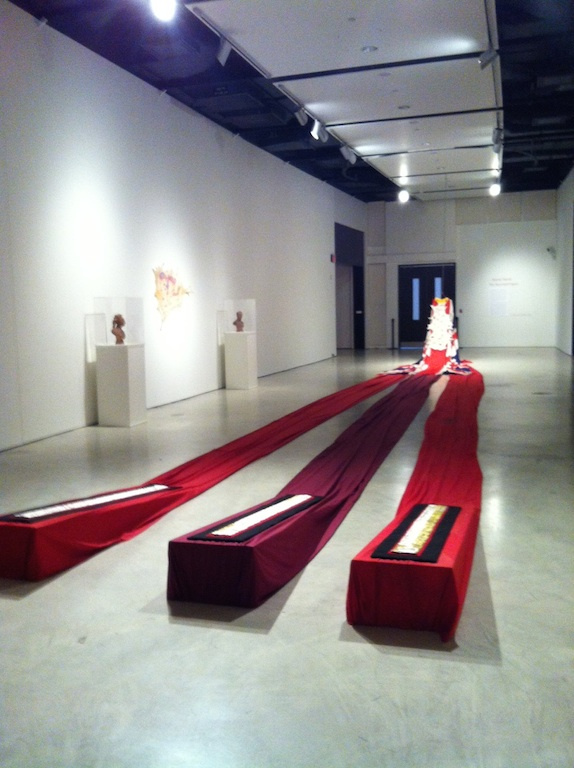 [1] All quotes unless otherwise noted come from an interview that I did with Bonnie Devine at the Art Gallery of Windsor during the installation of her exhibition Sept. 2014.